Boris Johnson doesn't want you to see this photograph. It shows his long standing girlfriend, soon to be Britain's First Lady of 10 Downing Street Carrie Symonds attending a meeting of a Pro Kremlin Front group called the Conservative Friends of Russia renamed Westminster Russia Forum. This networking club links MPs and Business people with the Russian Embassy and was previously known as Conservative Friends of Russia, set up in 2009, then renamed as the WRF on Dec 4th 2012 after it was exposed in the press. One of the key founding figures was Russian Embassy official Sergey Nalobin and Russian Intelligence Officer who was expelled by MI5 from the UK after his cultivating friendships with MPs including a certain Boris Johnson. Carrie was Special Political Adviser to John Whittingdale MP, Secretary of State for DCMS who visited Moscow as a Guest of CRF on 16 July 2012.

Carrie Symonds attended the Conservative Friends of Russia Launch at the Russian Embassy on August 23 2012.

At the event with Carrie Symonds was her future boss John Whittingdale MP Chair of the Commons Parliamentary Culture Media and Sport committee and the Vice President of the Conservative Friends of Russia. Symonds was at Conservative Central Office as Political Press Adviser having just been Political Press Officer for Boris Johnson "BackBoris 2012" campaign. Also there a future boyfriend Harry Cole of the Guido Fawkes Blog who had been to Moscow the previous December with Singh after his boss Paul Staines had co-hosted the First DigitalBBQ at the Russian Embassy which had been arranged by Portland Communications paid for by the Russians. Staines company messagespace would accept a contract afterwards promoting the Russian Embassy on social media. In 2013 Jag Singh, Paul Staines and Matthew Elliott would set up WESS. 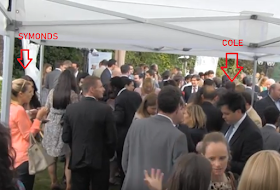 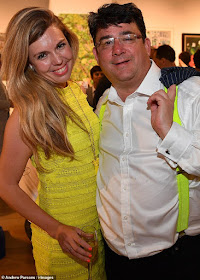 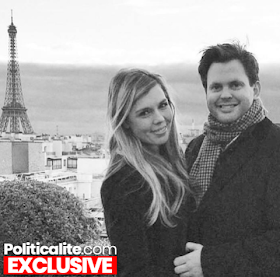 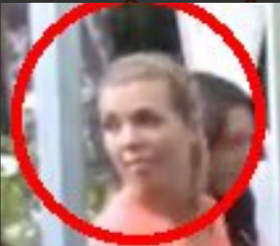 Sergey Nalobin was in attendance talking to Jag Singh who travelled frequently to Russia with IT Data Social Media Projects in 2011 onwards, setting up Messagespace with Paul Staines. 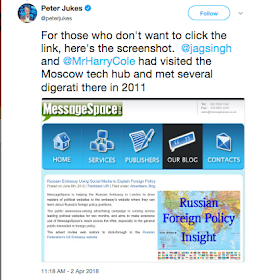 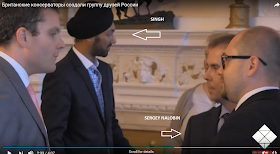 The following month Carrie's friends travelled to Moscow at Moscow's expense to Moscow and St Petersburg to visit the Russian Parliament, TASS and other pro-kremlin organisations. 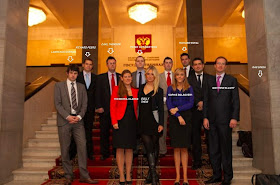 In Moscow, friends Theodora Clarke and Dolly Theis along with Carl Thomson.
Carrie seems to be a good friend to Jag Singh who first went to Russia in June 2011, and Jag is a friend to Sergey Nalobin. 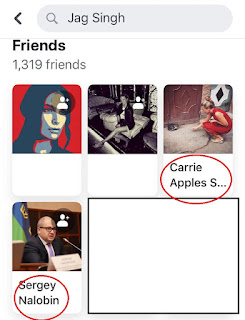 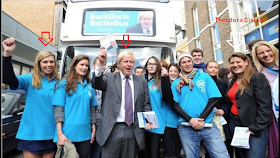 Carl thought that Putin wouldn't invade the Crimea or the Ukraine, and wrote pro-Yanokovych articles in Conservative Home. 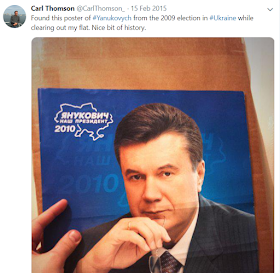 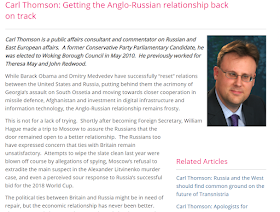 Carl Thomson was a key member of the CFoR - a Russophile, a friend of Boris Johnson and Theresa May and John Redwood who spoke at a WRF event. 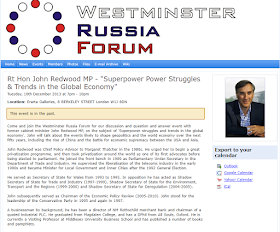 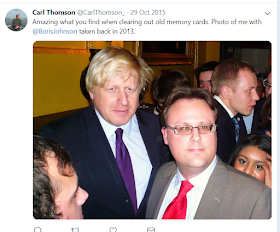 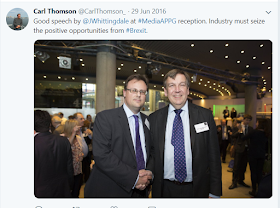 Whittingdale was also seeing at the time unknown to the Government a Belorussian Beauty called Natalia Lokhanova who appears to already have known Nalobin in June 2012 before she met Whittingdale. 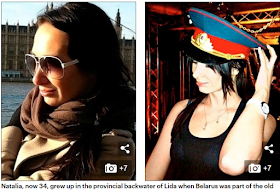 In fact the woman standing next to Carrie Symonds for the duration of the August 2012 CFoR launch at the Russian Embassy had a strong facial recognition to Lokhanova.

Boris Johnson was described by Nalobin as a "Good friend". 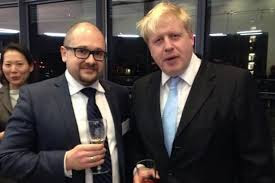 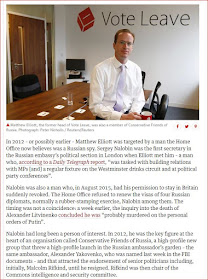 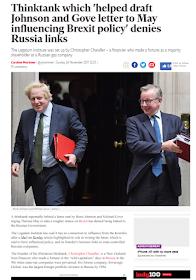 Boris Johnson maintains that while Russia interfered in the 2016 EU Referendum, they did not do so successfully. However since they were backing the Leave Campaign and Leave won, this is counterfactual, since they succeeded in their objective, which is a view backed up by the House of Commons DCMS Report which provided evidence that Russia backed Leave by powerful social media Fake news that was worth between £1 million to £4 million  which had 4 times the reach of Vote Leave and Leave EU campaigns .

242.The Government also cannot state definitively that there was “no evidence of successful interference” in our democratic processes, as the term “successful” is impossible to define in retrospect. There is, however, strong evidence that points to hostile state actors influencing democratic processes. Cardiff University and the Digital Forensics Lab of the Atlantic Council have both detailed ways in which the Kremlin attempted to influence attitudes in UK politics.270
243.Kremlin-aligned media published significant numbers of unique articles about the EU referendum. 89 Up researchers analysed the most shared of the articles, and identified 261 with a clear anti-EU bias to the reporting. The two main outlets were RT and Sputnik, with video produced by Ruptly.271 The articles that went most viral had the heaviest anti-EU bias.272 The social reach of these anti-EU articles published by the Kremlin-owned channels was 134 million potential impressions, in comparison with a total reach of just 33 million and 11 million potential impressions for all content shared from the Vote Leave website and Leave.EU website respectively.273 The value for a comparable paid social media campaign would be between £1.4 and 4.14 million.
Johnson was no stranger to Russian money having played an infamous game of tennis with a Russian Ministers wife for £160,000 donation to Conservative funds and he publically defended Russian oligarchs money  while his current leadership campaign is financed by money from India, the BVI and JCB which has key investments in Russia. Johnson is advised by Steve Bannon, linked to Farahe and Arron Banks and who is a key figure in the Trump Russia Mueller investigation and has linked to Salvini in Italy (Funded by Russia) and Marine Le Pen (funded by Russia) 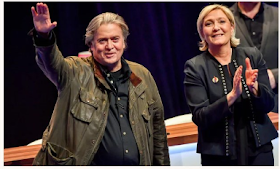 Johnson denied meeting with Mueller Probe Russian Go-between Joseph Mifsud until this picture surfaced of Johnson meeting with Mifsud in October 2017 after he had left the US, shortly before he disappeared in Rome. 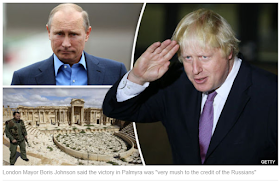 In March 2016 Johnson praised Putin's victory over ISIS in Syria say his Ruthless clarity was very much to the credit of the Russians.

Boris Johnson, the Steele Dossier and the Sacking of GCHQ Chief Hannigan to please Trump

Johnson was the Foreign Secretary from July 2016 until July 2018. He was the Minister in charge of MI6 and GCHQ and was the Minister who "accepted" Robert Hannigan's sudden resignation in Jauary 2017 as head of GCHQ. Hannigan had played a key role in triggering the Trump Russia Mueller Probe by travelling to the USA in  Autumn 2016 to share intelligence with the CIA on the Trump Campaign's Russia links and also provide a copy of the Steele Dossier. For his loyal efforts trying to protect the West from Russia subversion, Hannigan found himself forced to resign on a nasty pretext just days after Trump took power and Johnson clearly played a key role, alongside the National Crime Agency which provided the pretext. Harry Cole was the journalist who broke the story on the background alleged pretext reason for Hannigan's forced resignation.

A footnote is that Boris is not Johnson's First name, his real name is Alexander B de Pfeffel Johnson named after a Russian emigre friend of his father Stanley Johnson.who recently described Putin as "superb and fantastic" in a BBC trip to Russia, Johnson senior has a good friendship with Georgia Toffolo, Girlfriend of Jailed Brexit Party fundraiser George Cottrell another friend of Russia. It's a family affair, this Russia stuff.

Given the events of the Forced Resignation of Sir Kim Darroch, British Ambassador at the hands of Johnson, the police are investigating the source of the leak which triggered the events. Perhaps the forced resignation of Hannigan and the leak of the confidential events behind the scenes is an earlier similar phenonema.

In summary the Russian Embassy, especially Nalobin succeeded in networking with politicians who then went on to win the Brexit Referendum with Russian help, and digital and media figures which assisted. Boris Johnson was a key background figure in the CFoR and Vote Leave.
Brexituncovered at 2:32 PM
Share
‹
›
Home
View web version